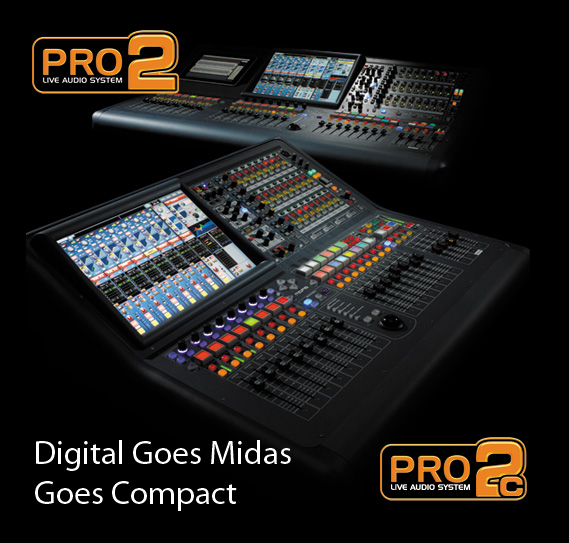 Midas launched its latest digital live sound consoles, the PRO2 and PRO2c, on the weekend at PLASA trade show in Earls Court, London.

The Midas PRO2 and PRO2C may be the smallest and least expensive Midas digital consoles so far; however, they represent a quantum leap forward in both technology and in concept for the art of audio mixing. Extending the line begun with the Pro6, previously expanded upwards and downwards in configuration with the PRO9 and PRO3 desks, the new Midas PRO2 and PRO2c (“C” for Compact) maintain the sonic performance of their XL8 and PRO Series, advance Midas’ innovations in console navigation and live production control, while setting a new company standard for value.

PRO2 can be operated in a number of different ways, depending upon the experience, ability and willingness of the operator to adopt new ideas. In “normal” mode, PRO2 behaves in a manner similar to many other digital consoles. Engineers who are new to Midas digital can relax, enjoy the PRO2’s sample-synchronous audio quality, and operate the console from well within their comfort zone. As an operator becomes increasingly familiar with the console, they can activate the advanced navigation features which enable access to undreamt of levels of ease and speed of workflow on an audio console. Digital or Analogue!

*weights are approximate and out of flight case