This is one of those occasions when many would agree the marketing hype surrounding a new release is pretty well on the money. For decades the sound of a Midas mixing desk was much sought-after, but–talking of money– how many of us could afford to buy the dang things? Finally Midas has come up with a means of everyone getting that Midas preamp quality by attacking an XL4 console with a chainsaw and lopping off eight channels to use separately. 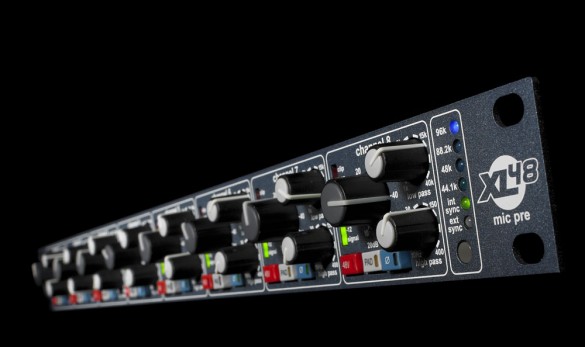 The new Midas XL48 is essentially eight Midas XL4 microphone pre-amps in a 1U box, complete with swept high and low pass filters, eight Midas XL8 A-D converters and a super-low-jitter 1ppm clock. Additional features include 8-segment LED input meters, individual phantom power, polarity invert and a -20 dB pad. All inputs are Neutrik XLR along with a 25-way D-sub connection. The XL48 also has both analogue and digital outputs in ADAT and AES/EBU format. All five outputs can be used simultaneously, allowing the XL48 to be a multi-function analogue/digital microphone splitter as well as still adding that Midas preamp tone to 8 channels of your mix. Multiple clocking options are available including external wordclock, internal 96 kHz, 88.2 kHz, 48 kHz, 44.1 kHz.