Dave Jacques at National Audio Systems (NAS) and production director, Dan Cornwell were recently tasked with replacing the existing PA at the Planetshakers City Church at the Dallas Brooks Centre in downtown Melbourne, opting for a d&b audiotechnik V-Series system. 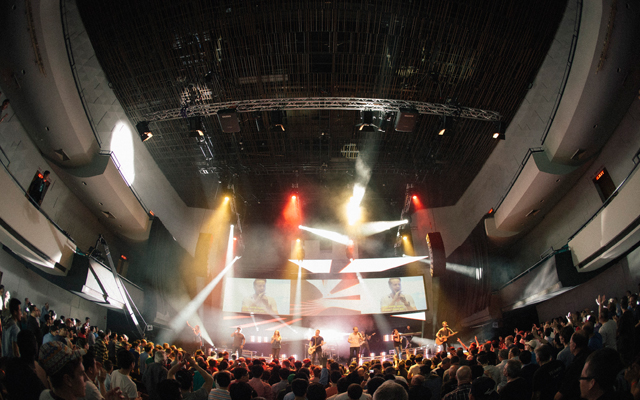 As well as the full complement of V-Series, V8, V12, and V-Subs, the final system included B2 subs as well as elements of Q-Series and 5S and 8S loudspeakers from the d&b White range for fill and delay.

‘We have an expanding congregation and a venue that can accommodate 2,100 across the stalls and two balconies,’ explained Mr Cornwell. ‘To deliver a clear, accurate spoken word was a priority; the utmost intelligibility is a necessity. The dynamic nature of our services has a major musical component, this demands high SPLs – and because of our expanding numbers we stage multiple services, so the system needs to be able to cope with regular and consistent use.’

Clear and consistent coverage across the broadest frequency spectrum was a key factor. ‘Dave recommended the d&b audiotechnik V-Series and during demonstration his judgement was vindicated,’ Mr Cornwell added. ‘The system exceeded our expectations.’

‘The number of balconies within the venue, and the fact that they extended down to the very edge of the stage, posed numerous challenges,’ Mr Jacques elaborated. ‘The balcony fronts also had the potential to create unwanted reflections onto the stage. The musicians might be using in ear monitors but such reflections only serve to muddy the general sound image. Some clever rigging to direct sound energy into the balconies and a neatly distributed system of fills and delays provided what Dan was looking for.’

Mr Cornwell and his team undertook the installation of the system with assistance from NAS. ‘Even the boss of the company, Shane Bailey came down to help,’ said Mr Cornwell. ‘He might have been curious to see why a church would want such a powerful system, but it was obvious to me that he was also scrupulous in ensuring the system was correctly set up. The final installed system delivers across an extremely wide frequency range with minimal distortion.

‘That’s probably the most noticeable feature of the V-Series, for a line array of its physical size it has all the potency of a much larger system and stands apart from other systems even further by its remarkable fidelity and efficiency,’ he reflected. ‘The flown centre V-Subs cluster are the icing on the cake, delivering an incredibly powerful low end punch to the upper balconies. We are extremely happy with the results of our new system. It’s great to find people who are as passionate about finding solutions as we are. The knowledge and assistance that came out of Germany and from NAS really impressed us.’