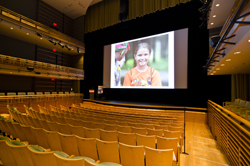 The Perelman theatre in Philadelphia’s Kimmel Centre for the Performing arts is primarily a recital room but also serves as the venue’s cinema. David Conner is the Centre’s audio department head: “We have just completed a significant investment in the Perelman cinema system, this is now full 4k specification, a 32,000 lumen Barco projector, 40 foot wide Stewart Filmscreen, and a bespoke 7:1 audio system using d&b audiotechnik V-Series and E-Series, designed and implemented by Pete Cosmos, systems integrator at Acme Professional.”

Seating 650 and with two shallow balconies above the stalls/orchestra, Cosmos considered the room to be generally sound reinforcement friendly: “It has a variable acoustic and can be softened for cinema sound reinforcement. We had already installed a surround sound system using d&b E8 loudspeakers, but to complete the system some weight was needed from the screen, this was to be the final piece of the new Perelman audio system.”

But the Perelman specification would have to be flexible. ”There was also a secondary need,” explains Cosmos. “Whatever main stage system we devised, it had to be able to redeploy to the neighbouring Verizon Hall for use at events there. We looked at both requirements separately, developed a number of solutions, and then looked at where the two agreed. The d&b V-Series, the 120 degree horizontal directivity of the V12 in particular, filled both those needs absolutely. While the Perelman didn’t require high levels, we typically run at minus 12dB, Verizon Hall is a much bigger beast.”

For the Perelman cinema system Cosmos adopted a quite radical approach. “We take the AES film stems right off the movie sound track at 48 kHz, into a Midas console. That upticks them to 96 kHz and then they are distributed via the d&b R1 remote network straight to the D80 amplifiers. The beauty of the V-Series is how it performs when the three high stacks are fully open at 14 degree splay, giving each compact system 42 degrees of vertical dispersion. For this situation that’s when they sound their best, and it also suits our design thesis, which is to place the sound reinforcement system as close to the natural position of sound origin as possible.”

“The three stacks are just below the screen (L/C/R), and we designed special dollies to raise them above the stage deck as much as possible to avoid reflections from below.” Cosmos continues: “With the stalls/orchestra being raked and two balconies to cover, the V-Series boxes lend themselves to coverage from this lower angle. This is not about even coverage where typically level and frequency response is prescribed within narrow confines to every seat in the house, this is natural propagation, so yes frequency response and level rolls off to the most distant seats: but it sounds right and it sounds natural.” Conner agrees, “The imaging is great, it travels across the screen left to right and up and down really smoothly, there are no noticeable hot spots from any seat in the house. It’s a very natural perspective.”

Conner had only used the system twice before staging the 2014 Marian Anderson Awards in the Verizon Hall and was impressed with how easily the system could be redeployed between rooms.

“The stage is 75 feet wide, the Hall holds almost two thousand people. This was an award show where there is a mix of speeches and presentation, which are interspersed with live performances. What we didn’t want was the loudspeakers intruding visually on what is a prestige event so we put them right out to the sides of stage. Using them and a permanently rigged centre cluster for the upper balconies achieved amazing clarity. Three people on my team stacked the system three high on the stage deck, two V12s and a V8, with a pair of V-SUBs each side in just under an hour from take down in the Perelman.”

As for the cinematic experience, “The reaction in the Perelman Theatre has been really impressive,” says Conner. Like all good parents movie directors are rightly proud of their offspring, so when remarks are made such as: ‘I’m hearing things now that I haven’t heard since we assembled the sound track in the studio’ or ‘finally I can hear it as it was intended to be heard,’ it’s clear something is working. “We have had several directors make such comments,” Conner recalls. “With the funding provided by a benefactor of the Philadelphia Film Society, those director comments were as emphatic an endorsement as we could have wished for.” (Original article found on ProSoundWeb here.)