I’m rather taken with the M32R. I wasn’t too sure initially what to expect from it, but I think it’s fair to say whatever expectations I had were certainly exceeded.

M32R is essentially an M32 which is rack width and includes rack rails in the box. I’m not sure why you’d ever want to rack mount it though, since doing so would imply you need to mount other stuff in the rack with it to get the gig done. You don’t need other stuff when you have an M32R, which is good since at >600mm depth you’d need a custom rack to fit it. 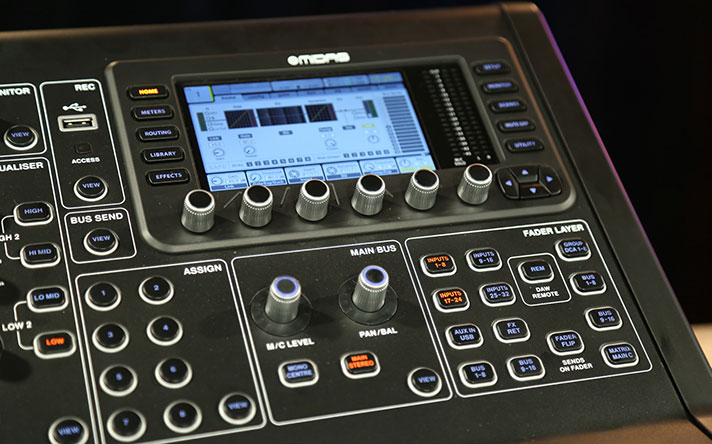 The console itself looks pretty good. Midas hired Rajesh Kutty who worked for Bentley to help with the physical design of the thing. For a relatively compact console it still looks physically imposing, which helps evoke that “substantial” feeling that is so inherent to Midas desks. The control surface isn’t too cluttered, carrying encoders for all the commonly used channel functions. The fader area is split into two banks of eight plus a master section.

Onboard the console has a bunch of IO – 16 Midas preamps with XLR inputs, line inputs on jack and even RCA, plenty of assignable outputs on an array of connectors, as well as talkback input and monitor outputs. That’s all great, and it doesn’t end there either. Digital IO includes dual AES50 ports, which open up the option for remote IO using a DL16 or DL150 rack. An “Ultranet” port facilitates connection to personal monitoring systems, and the internal card slot on Other card options include 32 channel ADAT, MADI and Dante interfaces. You’re pretty well covered to connect modern digital multiplexed protocols to the M32R, and even recording from it is pretty straightforward too. 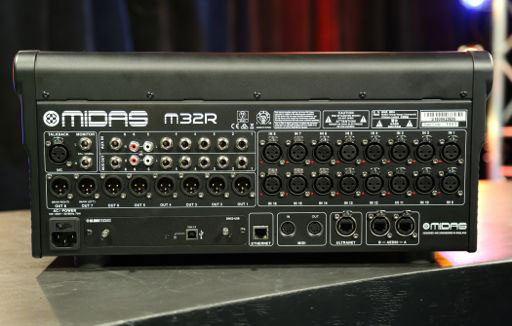 Finally, there’s a network port which allows for WiFi interface between the M32R and a variety of apps. The M32MIX and M32CUE apps for iPad and iPhone/iPod touch are free to download and provide different levels of control options to engineers and on-stage musicians. The M32 Editor for Mac or PC allows remote control over the console as well as pre-show programming of scenes. One of the most appealing aspects of this is the ability to use a real keyboard to name channels and the like!

I was genuinely surprised by how easy I found it to get around the M32R and make it do the things I wanted it to. There’s no ignoring the fact that at 5” the screen is tiny, and yet somehow this doesn’t seem to impede general workability of the desk as much as you might expect. Quick access keys either side of the screen allow you to jump pages and tabs within those pages, so it’s still pretty easy to access everything. The less commonly used functions are placed toward the back of the “stack” of tabs – just one example of how a good deal of consideration has gone into the user interface. Naming channels using an encoder is never an ideal situation, but somehow Midas has even managed to minimise the amount of annoyance involved. Hats off.

Functions such as patching can be executed in blocks of eight channels, which is a pretty good way to save time when you think about it. The fader banks default to left bank for inputs and right bank for outputs, but it’s possible to press two input bank select buttons together and thus access 16 input faders simultaneously. The “fader flip” function responds to whichever output bus you have selected. The talkback section has two programmable buttons which can run momentary or latching, and there’s a good monitor stage too. In addition to the internal 100 band RTA, the console has 16 virtual effects inspired by units like the PCM70, Dimension D, and the DN360. Online they look pretty similar to their ‘muses’, and with whatever authority I can claim to make such comparisons I reckon they sound pretty faithful. They certainly sound good.

The whole console sounds good. The last Midas I spent a lot of time with was an XL200, which sounded nice and had around the same sort of channel and bus count as the M32R, but required a forklift or 10 people to move. I’m not going to try to claim that they’re sonically identical, but they’re close enough that you’d need to think really hard about the extra labour, cable and outboard costs associated with using a large format analog console. Especially when the digital alternative sounds this good. You can hit the M32R preamps pretty hard before anything bad occurs, the EQ is good and responsive, and the dynamics processing works well. Even the headphone driver sounds good. 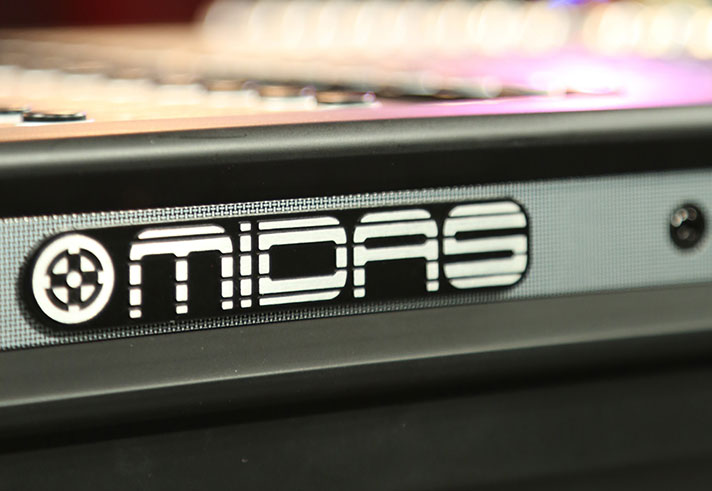 Admittedly the M32R doesn’t feel as nice as a Heritage 3000 or an XL8. I paired up some faders and noticed that they don’t track the same way at the quiet end of the movement – the paired fader doesn’t get all the way to the bottom of its track. Electronically they track correctly, so it’s more a visual annoyance than anything else. The faders don’t feel as nice as those on a heritage, but Midas reckons they’re rated for one million life cycles, so you can’t really argue with that. You can’t ignore that the M32R is a fraction of the price of a Heritage, and with this in mind I reckon the build quality is pretty solid. 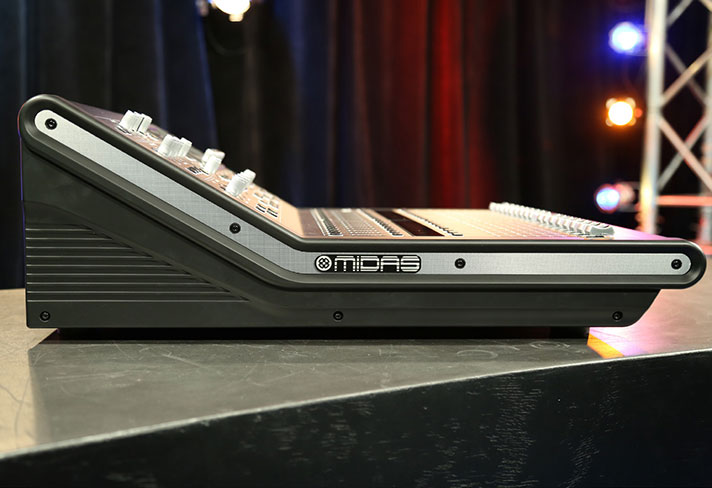 As much as I could fill half the mag talking about the M32R I’m not allowed, so if you’d like to find out more about the scene recall, assign section, or “acoustic integration” with Turbosound speakers just head to the Midas website.

There’s some talk on the Midas site about how the AD and DA converters are 192kHz 24 bit units, and the console has “future proof 96kHz capable open architecture design”. I’m not really too sure if this is what it actually runs at or something which will happen with a future software update. Really though it doesn’t matter – you don’t need buzzwords to sell a console like this, you just need to let people hear it.