dBTechnologies ES1203 – Giving it some stick

The ES1203 is the new two-top box, one sub, portable stick PA from dBTechnologies. It was with some trepidation that I approached it as I was not a huge fan of its predecessor, the ES503. The previous model was plastic, the top boxes clipped together with a poorly conceived sliding magnetic system that almost needed a crowbar to separate, and its performance was suited to speech and low level BGM, at best. At least it was cheap.

Imagine my surprise when we ran the level up on the ES1203 running in stereo mode, and it damn near pinned me to the wall. There were mids, low mids, and musical bass! Vocals were sitting confidently in the mix without any perceivable distortion! It is, in short, a capable PA in a very small package. So what’s changed? 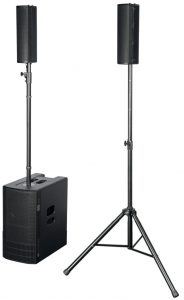 Firstly, it’s wooden construction and more than double the power. A new 2400W amp housed in the semi horn-loaded dual 12” sub is providing more than adequate grunt to the whole system. The two top boxes house four 4” Neodymium drivers with 97×60° (horizontal x vertical) coverage that can be slightly beam steered (‘up’, ‘far’ or ‘down’) in the on-board DSP. The performance difference between the ES1203 and the ES503 is night and day.

Practically speaking, the ES1203 ships with the sub, sub pole, two top boxes, 2 seven metre Speakon cables and soft cases for all three speakers. The mixer and DSP housed in the sub has three combo jack inputs and a Bluetooth receiver. You can run this system in mono, with the two top boxes clipped together and mounted on the sub pole, or stereo, with the second top box mounted on a speaker stand that you supply.

If necessary, you can run two ES1203 systems as one big stereo system, with two top boxes clipped together per side.If you did, you’d easily be able to cover a 200 to 300 person room, depending on the content.

When clipped together as a single column, the top boxes only require one Speakon patched to the bottom box, and the redesigned box connection does the rest. The new magnet and metal lock system is a huge improvement on the last generation – they snap together vertically with ease and form a reliable and trustworthy connection, and are gracefully released by pressing tabs and then simply lifting apart. 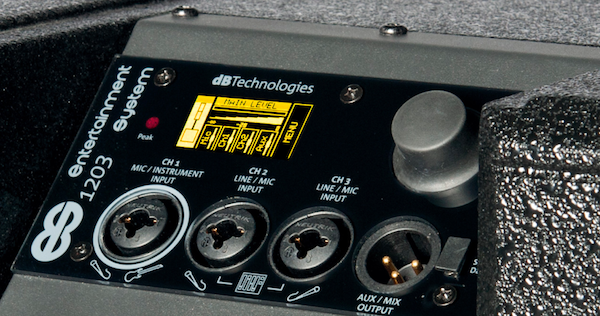 Down on the sub, an ergonomically placed OLED screen and ‘one knob’ interface allows you to access all of the mixer and DSP parameters.

I’ve used quite a few stick PAs recently, and I swear at least three of them, including this one, are actually using the exact same screen, menu and software as one another, perhaps OEM’d by the same supplier. The upshot is, it’s all very intuitive and familiar – mic/line switching for inputs, levels, presets, system config, it’s all there and pretty obvious.

The only things that weren’t immediately easy to get to were some of the more flexible and useful EQing features. For example, there’s a three-band semi parametric with sweepable mid as the system EQ by default. You can actually change that to a high or low shelf if you like. There’s also semi parametric EQ over the mic ins, but you can also change that to a feedback suppressor or HPF if desired – that was not easy to find, as you have to go poking around in the channel EQ page, mouse over the right button, and press. Mic gain has only three settings; 0, +10, or + 20dB, but the mixer is useful enough for that not to be an issue.

Stick PAs are improving across the market from nasty tinny things for speech into actual alternatives for full spectrum reproduction, and the ES1203 is a solid performer. With thoughtful accessories available like magnetic dollies for the subs, it’s even conceivable that two ES1203s could handle a (very) small band tour. 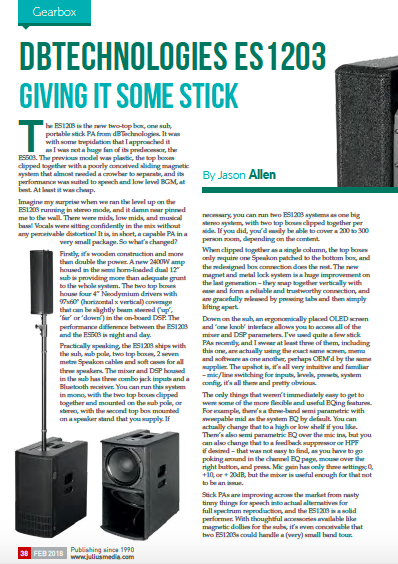 This article first appeared in the print edition of CX Magazine February 2018, pp.38-39. CX Magazine is Australia and New Zealand’s only publication dedicated to entertainment technology news and issues. Read all editions for free or search our archive www.cxnetwork.com.au