Mention dBTechnologies to me 10 years ago, and my mind would have instantly conjured up plastic 12-and-horn boxes you find in a mate’s garage. Gear that gets pulled out for 21st parties and when the budding family DJ makes a living room debut. It wasn’t bad stuff by any means, Opera was actually a very good box, and dBTech and its corporate cousin RCF did very well off the humble powered speaker.

When dBTech decided to launch into more serious audio markets — those requiring more boxes and more coverage — it cracked new ground (line arrays) while keeping a bit of its DNA (powered plastic boxes). The product was DVA, which has since become one of the all-time best-selling line array products with 30,000 units sold worldwide. Proving once again dB knows what the market wants.

Granted, it took several iterations for dBTech to iron out the wrinkles in pattern control and tone. The flagship T12 cabinet was right on target, as the sales figures suggest. The solid win bolstered dBTech’s confidence to invest in R&D and focus on a whole new array product. A few key criteria were laid out on the drawing board — it would be a notable step up from DVA, and it would target the rental and touring markets. A few years later, dB shed its plastic skin and announced its first touring PA. It’s called ViO. 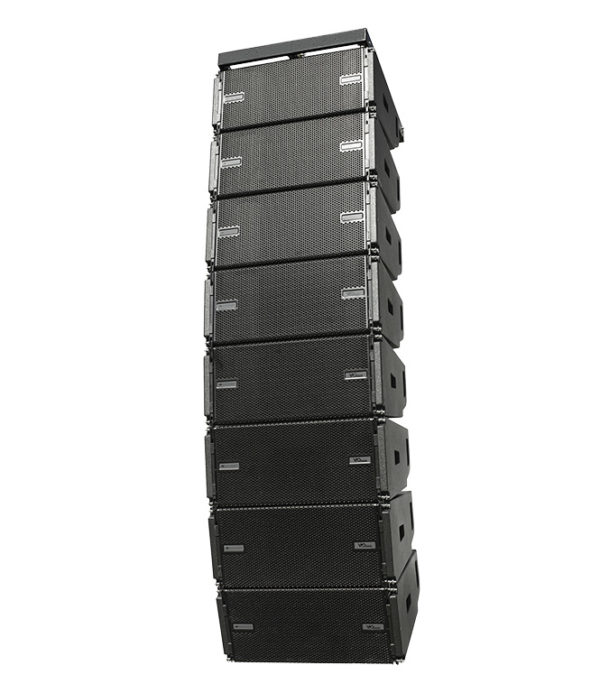 National Audio Systems had a full system firing at Festival Hall in Melbourne for ViO’s Australian launch. To cover the venue, NAS hung eight boxes a side, with two stacks of three triple 18-inch S318 subs in a central cardioid configuration. Safe to say, everyone who came was quite impressed with ViO’s voicing, smooth pattern control, and smashing SPL for the size.

Aside from the PA demonstration, the launch gave dBTechnologies’ Marco Cantalu a chance to fill the Aussie market in on his company’s background. Being under the RCF Group means the relatively young startup has PA in its DNA. Its headquarters in Bologna, Italy, is only a stone’s throw from the homes of Ferrari and Ducati. Tertiary education in the region births some of the world’s finest young engineers in the automotive scene, and dBTech has enjoyed first pickings of these bright sparks and put them to work in the pro audio world. It’s a youthful team at the office, and Marco says that’s what makes the dBTech difference. While I’m talking to Marco at the launch, one of his Italian colleagues texts him to sound out a waveguide idea for a product in R&D. Marco replies, “It’s 2am, why are you awake?” Case in point, he shakes his phone at me and says this is the work culture at dBTech — passion for sound.

Like the DVA series, ViO boxes are active. An active, self-powered line array system certainly has its benefits. You don’t need to lug a rack of amps everywhere, you save on cable costs, and the individual amp-to-driver pairings makes for more possibilities when configuring pattern control and throw distance than if multiple boxes were grouped into single amp channels. Conversely, if an amp goes down before a show, it’s easier to switch an amp in a rack than it is pulling down an array to get at the faulty loudspeaker module. Besides the EAW Radius and QSC KLA systems, there aren’t many big players that’ve released active line arrays in this market, and this may well be a decision-making factor for potential ViO adopters.

The star of the show is the ViO L210 active two-way line array element. Self-powered by Digipro amps, L210 has two 10-inch LF transducers positioned in a V formation which are covered by the full-height aluminium phase plugs with diamond-shaped hole punches designed to reduce interference within the crossover zone. It’s powered by a Digipro G3 900W class D amplifier. HF material is generated by a three-inch voice coil compression driver through a 1.4-inch exit throat out into the world at a horizontal directivity of 100° thanks to the newly-designed waveguide. Generally you want the crossover frequency to stay away from the crucial vocal intelligibility range, so the 950Hz crossover point of the L210 may raise an eyebrow, though in practise while the voicing was rock-forward it felt very balanced. Its maximum output SPL of 135dB SPL places the L210 in d&b T-Series or L-Acoustics territory.

Monitoring, configuration and control can take place remotely via dBTechnologies’ own RDNet networking protocol, with an RDNet Control 8 or Control 2 unit acting as the interface between PA and PC. dBTechnologies Network Software lets you keep an eye on things like temperature, limiter status, levels, and all further operating parameters in real-time.

Getting it up in the air is easily a one-man job. The L210 has a built-in three-point rigging system that lets you select your splay angles while the boxes are still on the cart using a hook-type link on a central rear rigging strand. String up the array and your angles fall into place.

A ViO system is offered with two subwoofer options — the single 18-inch S118, and the triple 18-inch S318. Both of them are active, powered by 1600W class D Digipro G4 amps. The Digipro G4 preamp has a slot module for RD Net system monitoring. Digipro DSP features onboard attenuation control and a delay module allowing a maximum of 9.9ms delay in 0.1ms steps. Cardioid configuration is stored as a preset ready for groundstacked or flown use with another S118.

The triple-18 S318 isn’t three times the size of the S118, although its width renders it un-flyable. It also has a built-in cardioid preset, 2700W of power, a frequency range that drops to 35Hz, and a box that’s optimised for in-phase frontal emission — the kind you’d string across the front of a stage. Onboard delay adjustments help you line up the wavefronts with precision and of course this can be controlled remotely via RD Net. 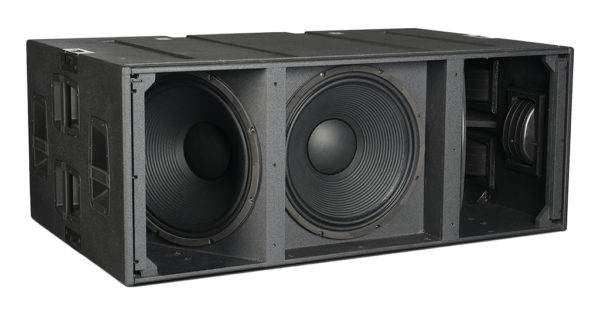 Though it’s a young company, dBTechnologies has made big strides. A decade refining its hardware and DSP with DVA has really helped the company debut with a strong contender in the mid-level touring game. Though it’s hard to tell on a first listen without mixing on it yourself, the ViO is a great sounding system — loud and articulate, a high-mid edge that could help vocal cut through, with defined pattern control and plenty of throw for Festival Hall. Time will tell, and definitely worth having a listen. Rental and touring markets will benefit from the straightforward rigging, built-in amplifiers and comprehensive RDNet remote control/diagnostics capability. dBTech has promised Dante compatibility soon too. Up against similar offerings in the market, ViO has a lot going for it.

Many thanks to Preshan at Audio Technology for his original review, which can be viewed here.