8th Day Sound fast tracked a 24-box d&b KSL rig for an Australia Day gig. We line up J with K for a fascinating comparison. 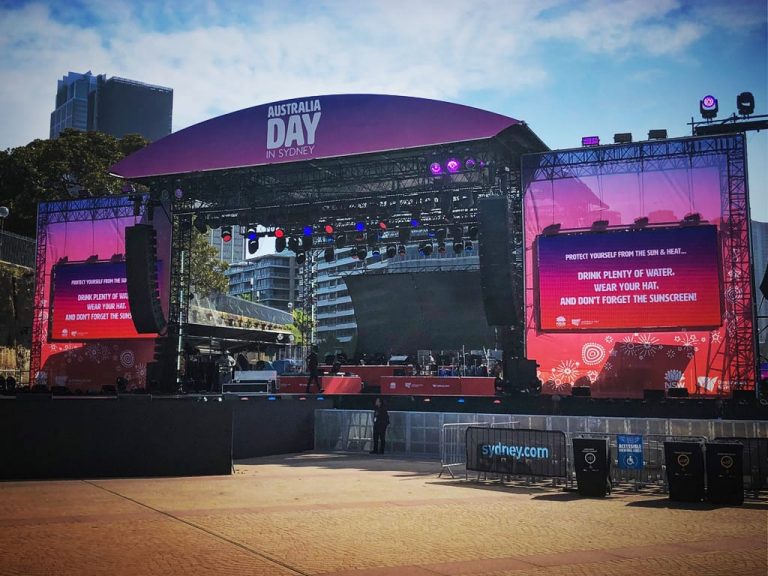 Published On March 28, 2019 in Audio Technology

Air freight is a wonder of the 20th century. What for centuries took months on a boat could now magically materialise in days or hours.

Its novelty has worn off somewhat. Order a $2 cable from eBay and it arrives a few days later from Hong Kong. Something that travelled 6000km was cheaper than driving to the mall.

But how about the air freight of 24 loudspeaker cabinets, just in time for a gig? Surely, this is non-trivial enough to make you think twice.

8th Day Sound was supplying the PA for the Australia Day Live concert in the forecourt of the Sydney Opera House. The forecourt, on the steps of the opera house is an amazing venue. There have been some unforgettable live sound moments. (Crowded House’s final concert was there, for example. The Bjork gig was something else as well.) But the Opera House isn’t the only resident of Bennelong Point; some of Australia’s priciest apartments are all less than 100m away.

Ever since The Toaster (the nearby residential apartments) was constructed there’s been some tension: how to stage a gig without poking the hornet’s nest of the local burghers.

One suggestion would be to offer them all free VIP tickets. Another is to turn down the volume of the PA. Now, there’s a third way, employing d&b’s newest PA: KSL.

NO NOISE IS GOOD NOISE

The speed limit at the desk was 92dBA or 102dBC, on a five-minute LEQ.

Tristan Johnson: “Australia has some heavy restrictions. Using the Sydney Opera House’s forecourt has always been delicate from a noise police perspective. The Opera House is intent on ensuring it can keep staging outdoor events into the future and do not want one single event to jeopardise the future of those events. It’s a really big deal for them and they take compliance extremely seriously.

“From an Opera House perspective they engage Auditoria to put together a sound plan for an event, then The PA People do the official noise monitoring. They have metering in the Toaster [the nearby residential apartments], at front of house, on the northern shore of the harbour, and a mobile measurement. Finally, the Opera House has a sound management team that liaise between me and The PA people. So there’s four levels of noise management on an event like this. We all work well together with no infringements and fewer complaints over time.

“KSL is another step in the right direction.

“I’ve had feedback from The PA People, reporting that we were quieter behind the stage. One of their main reading points is the nearest residents straight behind the stage, so that’s a huge plus. My belief and my hope is that KSL will give us measurable improvements in the surrounding areas and so far it’s looking very much like it does.”

KSL’s headline feature is remarkable directivity right down towards 50Hz. The spill from the rear and side is eerily negligible; meaning, you can put more sound where the people are and way less sound where the easily irked residents are.

You can begin to understand why 8th Day Sound was quick to pull the trigger on getting a 24-box system parachuted into its Caringbah offices only days before the concert.

“Last time I checked, 8th Day Sound has the biggest d&b inventory in the world and we were one of the first to receive KSL. These particular boxes have come from our US office. We were doing our best to get the system here for Australia Day Live for a few reasons: to better deal with the environmental noise concerns, plus we knew the Sydney Opera House would be keen to hear KSL in action.”

8th Day Sound’s head of sound, Tristan Johnson, is of course referring to the Sydney Opera House’s love affair with d&b. The Concert Hall is packed with J Series. The Opera Theatre is now refit with a d&b Soundscape immersive system. And apparently the Opera House sound department has regularly been checking in on the status of KSL — ‘when’s it landing?!’

The arrival of KSL was so touch ’n’ go it wasn’t even on the initial 8th Day quote. But when it materialised, and occupied the main left/right hang of the Australia Day Live rig, no one was complaining, least of all FOH engineer Ian Cooper. 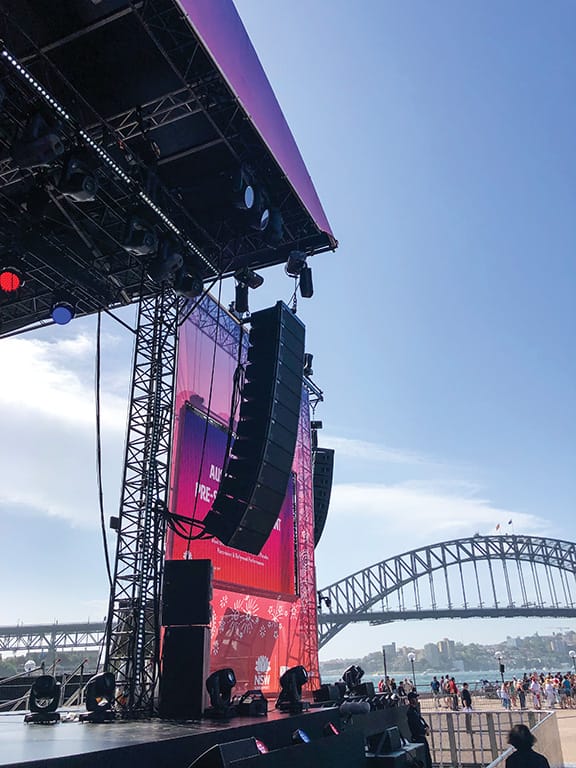 MIXING AT THE STEPS

Ian Cooper has plenty of Forecourt shows under his belt. He’s worked with OB maestro John Simpson on a many occasions, teaming up on events that require a TV broadcast mix, such as Australia Day Live which went live to air on the ABC.

The event is a variety-show-format, family concert with a bunch of talent show winners singing faves from the Oz rock songbook. Sounds reasonably straightforward, but when you add a 33-piece Sydney Symphony Orchestra ensemble, you realise you need a safe pair of audio hands.

“It’s all about hearing the detail. That’s the aim for this gig,” commented Cooper. “But when you have dozens of open mics on stage there are some constraints. We have all the strings close-miked on DPAs, while there’s a good complement of condenser mics on reeds and winds. You can’t just push the level up if you want to keep the balance but that’s definitely where KSL helped us compared to last year — what didn’t come out of the back and sides of the KSL PA was quite helpful when you’ve got that many open mics on stage.”

Tristan Johnson also instantly noticed the lack of on-stage spill: “Behind the KSL it’s almost silent. It’s so quiet that the monitor guys had to beef up the side fills a little bit and add a little bit more on the stage to compensate for what you would normally expect to spill onto stage from the PA.” 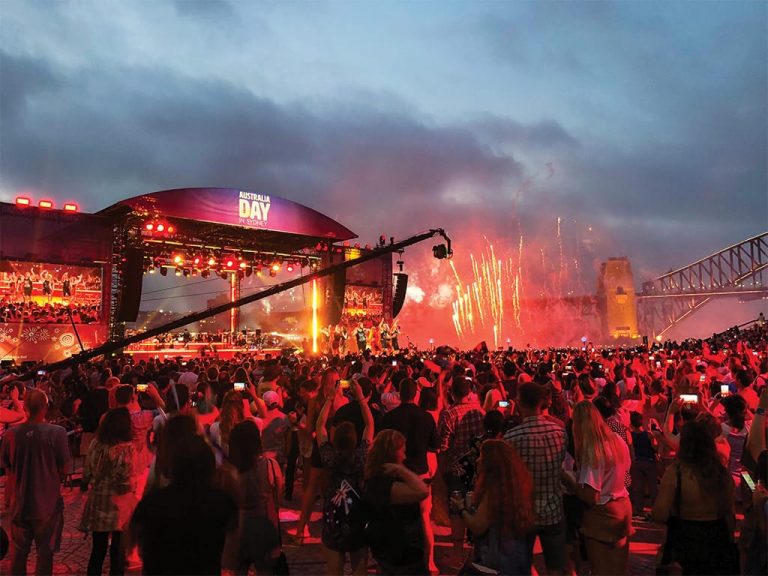 With years of being around d&b’s J Series, Tristan Johnson knew that KSL was something special very early on.

“I had J Series on the side hangs of the Australia Day Live concert — which I’m a big fan of and used for a long time — and KSL as the two main hangs. When I walked out there, I listened to the main hang, then walked around to listen to the side hang and I was like, ‘Wow’.

“What am I hearing? For starters, I’m hearing the classic sound of d&b — the German’s take on what a good box should sound like. But that was a given. On top of that the KSL’s throw is further and smoother. It’s a lot more controlled in the mid range and the low/mid range, and there’s power there.

“I’ve been working with d&b loudspeakers since 1997 and power has always been a feature of d&b. KSL has power. It’s got headroom. I used to have to push the J a little bit harder. KSL, I’m not having to drive so hard.

“The box has a slight tonal difference to the J, but it has a very true tonal signature to what I expect from d&b.”

Tristan was tasked with tuning the PA and had his antennae up:

“It sounds nice straightaway and the transition between the mids and the highs seems smoother now with that extra power in the mids. As soon as you put the vocal in the PA it seems to jump out at you straight away. Very cleanly and truly.” 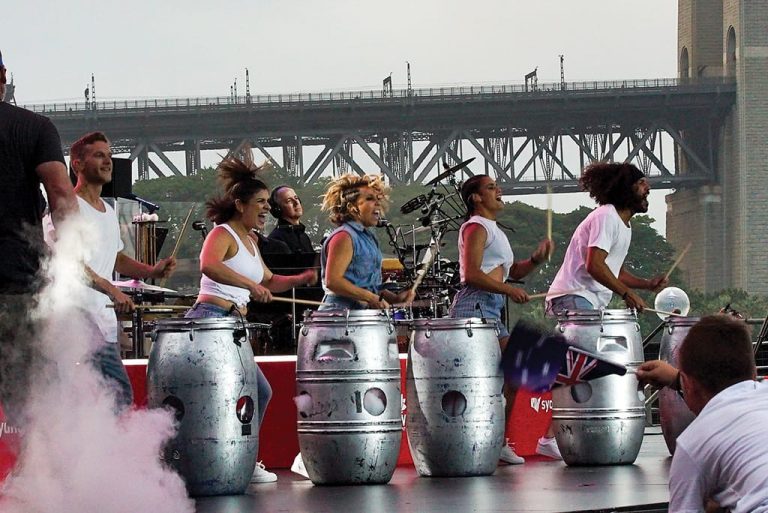 I asked Tristan to elaborate further on the KSL tone and how KSL gels with the software tools d&b has been developing over recent years.

“It’s our job to create a tonally-even audience area, front to back. While we accept there’s a level drop off over distance, we want to sound tonally the same at the back as we do at the front. ArrayProcessing is something d&b developed for the new SL range [although it also works with J Series, for example], so after we’ve set up the PA and tuned the PA we can run the ArrayProcessing. As soon as I put that in, the linearity over distance is increased… the PA is optimised.

“It’s an interesting experience. It’s my job to spec the correct PA for a job. I do that in Array Calc. It’s satisfying when you rig that PA and you know the predictions were right. Now with ArrayProcessing it takes that predictability up another notch. I can hang a huge J Series festival rig and with ArrayProcessing I can present the PA to the FOH sound engineers with flat EQ — literally no system EQ. It’s like I’m giving them a blank canvas to paint on. That’s ideal.” 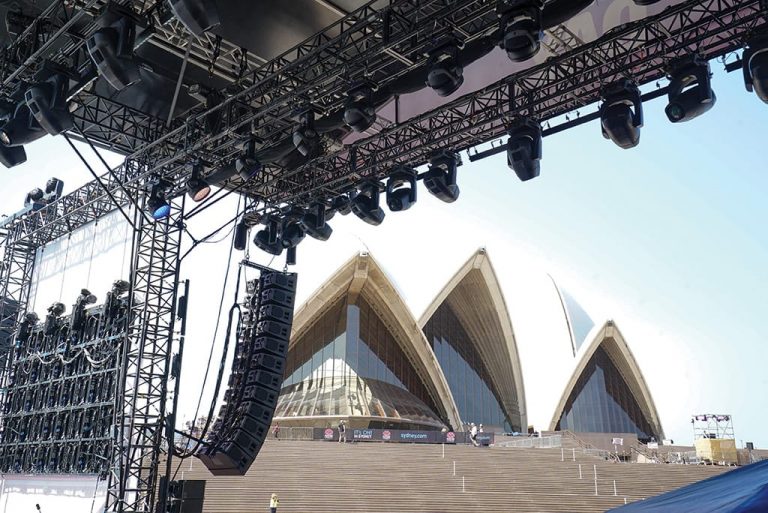 Another SL Series Easter egg that came to Tristan Johnson’s attention was a feature called ArraySight. Mounted directly on the GSL and KSL Flying frame, the d&b ArraySight laser inclinometer contains temperature and humidity sensors. This information is relayed to the R1 Remote control software via OCA/AES70 or the handheld meter unit.

Tristan Johnson: “Now I’m able to look at the humidity above the crowd as well as at crowd level and see the difference, because the ArrayProcessing I use is based on humidity and temperature. I now have that comparison.

“I’ve always known that what’s going on six metres above my head is totally different but it was impossible to quantify. I’ve never really thought about the solution, so it’s a cool step; it’s a very cool step.”