Home News The Magic of Theatre

The Magic of Theatre

Soundscape, d&b’s object-based immersive audio platform, is put to full use at the relaunch of the Mary Poppins musical in Sydney’s Lyric Theatre.

We don’t often see genuine quantum shifts in how sound reinforcement and PA systems are designed and applied to do the job they do. However, we’re seeing something now. The d&b Soundscape system has broken the mould to offer something innovative and very interesting in terms of touring sound, in particular when it comes to theatrical productions.

Soundscape was first announced in 2018, however circumstances since then have determined that we haven’t seen a full-blown, dedicated d&b Soundscape system in Australia until now—courtesy of Sir Cameron Mackintosh returning ‘Mary Poppins’ to the Lyric Theatre in Sydney. The relaunch of the show promises a new and exciting version of the musical, and a big part of that is the d&b Soundscape system driving the audio experience. Having a close look at this particular system, and cornering System Designer Paul Gatehouse for a chat before he jumps on a plane to return to Old Blighty, reveals the full story behind the d&b Soundscape system. 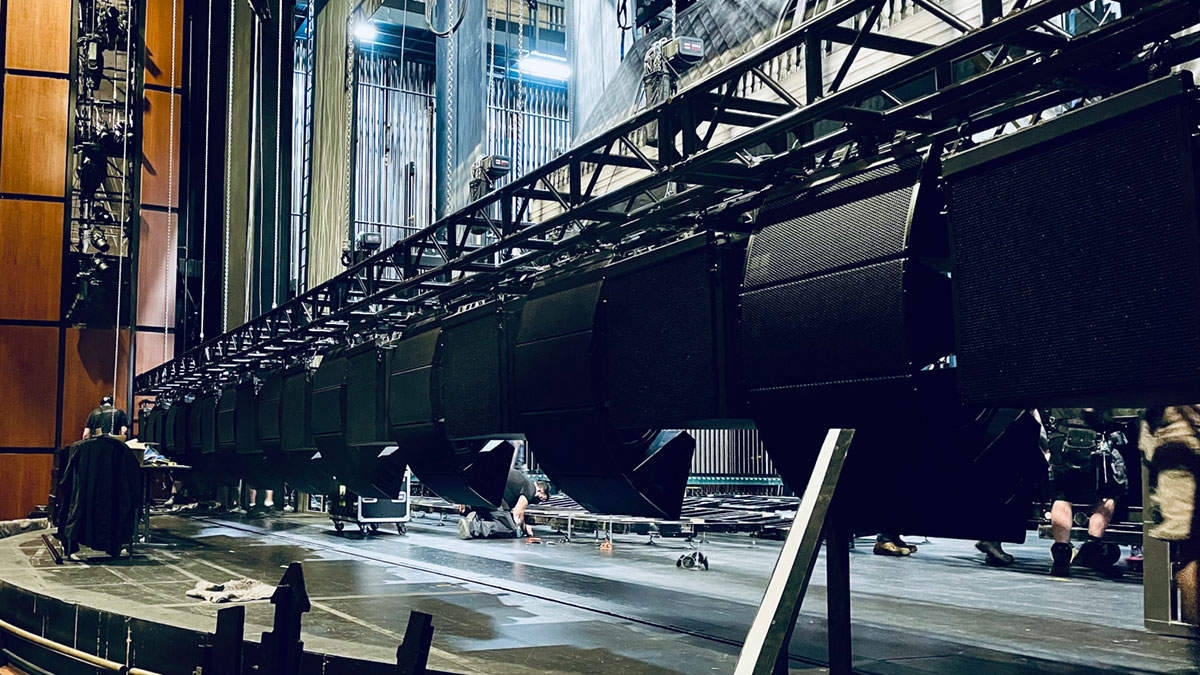 EVERYTHING IN ITS PLACE

In some ways, the ‘magic’ of theatre has been somewhat compromised in recent years by the in-your-face technology employed to produce things on a large scale. That’s about to change. The best way to describe the Soundscape experience is that the venue, from the listener’s perspective, becomes a complete soundscape that envelopes the audience while removing any perception of an audio point source. Awareness of the PA system kind of disappears, leaving just the show. You might immediately make comparisons to Dolby Surround, and that doesn’t quite fit. Dolby Surround programming often aims for effect, producing and ‘placing’ specific sounds in and around the audience to maximise impact—Soundscape can do that as well, but that’s not the primary objective. Instead, the idea is to accurately place every sound involved in the mix spatially according to the sound source’s position on stage (or off it), meaning left and right and depth, and including any movement—for every seat in the house. All without the perception you’re hearing a specific speaker cluster—or any speakers for that matter. The audience is immersed within the soundscape rather than being confronted by it.

Paul Gatehouse puts it simply. “What you see is what you hear.”

There are three main components to the Soundscape formula. First is the physical d&b PA and the speaker elements in place. These are d&b products used throughout its range of PA configurations, not units specific to Soundscape. Instead of the now-standard LRC cluster positioning, with perhaps repeat clusters towards the rear of the auditorium, a much more complex array of individual speakers is installed above and below the proscenium arch, then also throughout the auditorium, to create a complete 360-degree coverage of the venue. It creates the field of sound crucial to the Soundscape concept rather than the more traditional idea of L/R arrays providing some control and near equal SPL to all corners of the room. So yes, there is a bit of rigging involved, but they are mostly individual elements and it’s not so daunting as you might think. 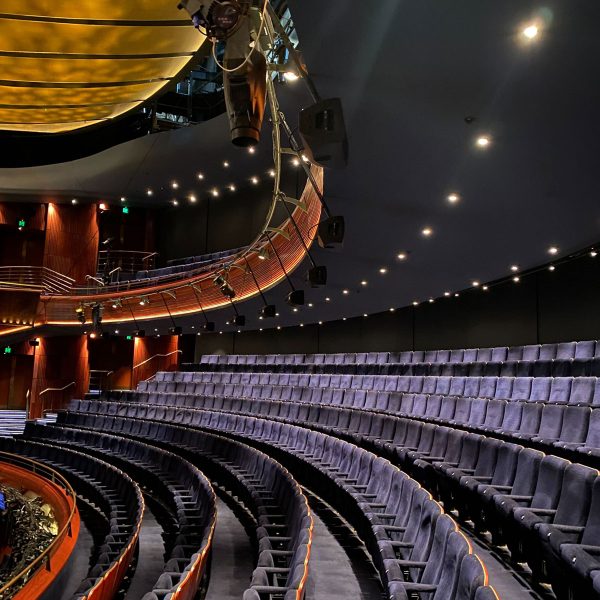 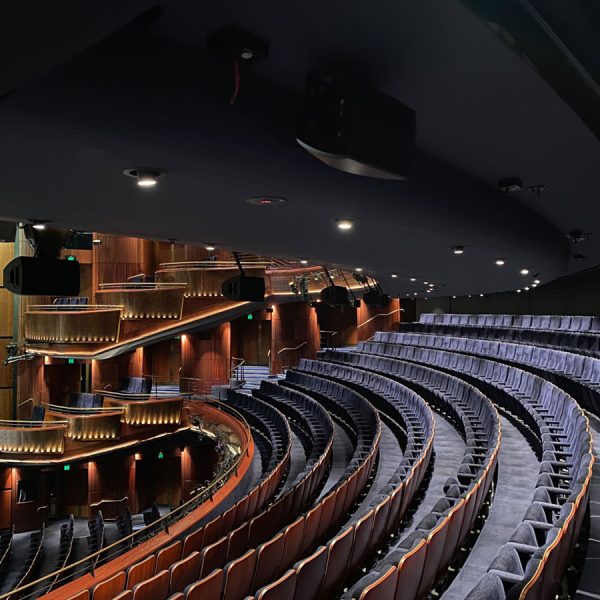 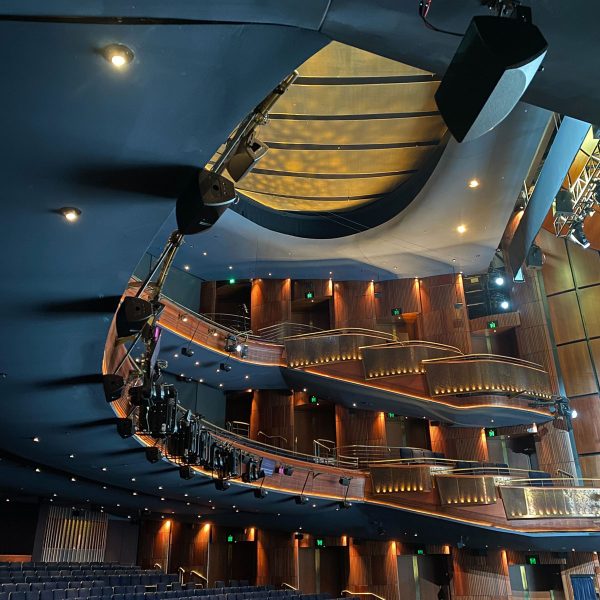 Next comes the true ‘brains’ behind the Soundscape concept, the d&b DS100 processor engine with its En-Scene and En-Space components. Through the DS100, the design of the PA and the delivery of any sound is what’s called ‘object-based’. That’s not a usual term for most engineers—think of it this way, anything included in the audio mix can be assigned as an ‘object’. So, a solo vocalist, a chorus ensemble, the band’s drummer, the entire orchestra… anything at all via a single channel or a buss group can be designated as an object. Each DS100 module can handle 64 separate objects.

It’s the projected position and movement of these objects that the DS100 handles, constantly adjusting the distribution of the audio across the entire array of speakers to mimic a real-life perception of how each audience member should hear that ‘object’. For example, a solo actor designated as an object can move from upstage left to downstage right, and processed by the DS100, that mix signal to the whole speaker array is compensated on the fly to accurately reflect the actor’s position. Essentially, it’s panning from left to right taken to the nth degree on an X-Y axis and delivered into the sound field. The tracking can be manual—that’ll keep you busy—pre-programmed, or in the case of Mary Poppins, it’s automated using TiMax Tracker D4 sensors worn by the cast and networked into the DS100.

It’s worth bearing in mind that not all the objects will be moving. Some, like the orchestra, will be static after perhaps the various object sections of the band (wind, brass, and so on) are placed effectively in the sound field, so it’s not like you might be herding sixty-four cats around the stage environment (then again … ah, ‘Cats’). It raised the question of whether the object mapping might be a feature that could perhaps become over-complicated in the hands of some, let’s say, ambitious directors.

Paul Gatehouse explained, “No, not at all. Really, Mary Poppins is a more established storybook musical with a huge Disney-like, cinematic feel yet still traditional, but we’ve done more contemporary productions where the creative sky is the limit and Soundscape with the object tracking has allowed some fresh, wonderful effects… ear candy, if you like. It’s show-dependent, but given the opportunities there are many more layered possibilities and there’s never a sense someone might take things too far.”

ADD A DASH OF CLASSIC VIENNA?

The third component of the Soundscape system is called En Space. d&b describes it as a “software module to enhance or build an acoustic environment, either indoor or outdoor, based on the convolution of the audio signals…” you can guess the rest—it’s a multi-channel 3D convolution reverb that reinforces the sound source’s position on stage with location specific early reflections. To achieve this, d&b has gone to extraordinary lengths to create the En Space effects, mostly based on sampled responses from several famous Vienna concert halls. The idea is to provide some subtle warmth and ambience to venues that don’t have any natural tones—outdoor shows being the obvious example—or when the space does have its own feel, En Space can be used as a creative tool. Paul often applies En Space to certain sections of the orchestra that aren’t suffering the enclosed pit space too well, and he also switches algorithms depending on the genre or tempo of the music. “It’s one of the best reverbs I’ve heard, because of the intense process that d&b went through to create them. They’re incredibly detailed and transparent, and of course very useful if you’re in a venue that doesn’t have a character of its own. Overall, even in a good space, it kind of gels everything together.” 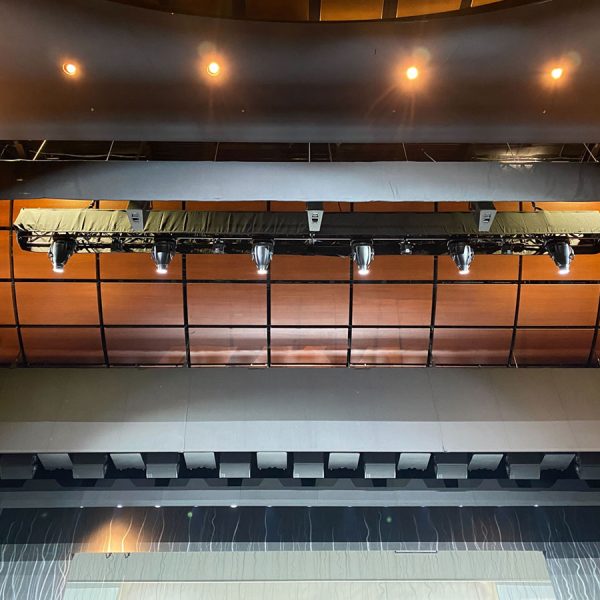 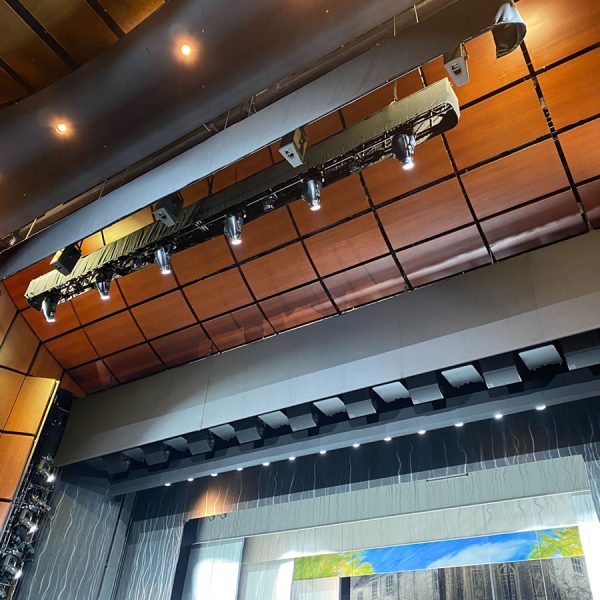 It’s easy to imagine how d&b Soundscape can offer all kinds of sonic possibilities to a broad range of performances, but how well can it tour? The answer lies in the workflow that Soundscape is programmed and configured for the show first, then the PA design to create the soundfield comes next. In other words, a majority of the sound design involves the production itself and carries over from one venue to the next. The logistics of putting in place the speaker elements is a relatively straightforward engineering challenge, just like any venue, then the PA is tuned accordingly. There isn’t a whole heap of reprogramming and redesigning from one venue to the next, although they do present a chance to push the Soundscape envelope further. Paul tells us, “We originally used the system in London, and it was relatively new back then. And since then, as we do further productions, we keep discovering more of what it can do, working with d&b to add new features and functions, and fine-tune things.”

It seems it’ll only be a matter of time before d&b Soundscape (and immersive systems like it) will be the standard in theatrical productions, and audiences everywhere will be experiencing every song and every note with perfect clarity, without ever noticing how it’s all happening. Absorbed by the performances which sound so natural, the sound system will disappear if you want it to, or as Gatehouse approaches sound design, “for me the sound design of any production is for it to be another character in the story, I generally don’t tend to try and hide it but rather lean on my tastes towards dynamic and cinematic story telling with a detailed and forward texture. The two shows that I’ve used Soundscape on, ‘Mary Poppins’and ‘SIX’ are completely different stylistically, but both command a big sound and the Soundscape pallet allows me to conjure up those believable sonic worlds with precision and detail through the whole of the listening space.”.

The true magic of theatre is returning to Mary Poppins thanks to d&b Soundscape.