Enquire about this product

The IN-Series monitors are unlike anything you’ve ever heard. The three-way design lets both the woofer and the tweeter do less work, resulting in better headroom and lower distortion across the frequency spectrum.

At the same time, the coaxial architecture of the midrange and tweeter result in hyper-realistic imaging. This means that you’ll be able to hear subtle details in your mix with pinpoint precision.

The design of the system comes together to allow the IN-Series monitors to act as acoustic point sources. They enjoy all the benefits of both traditional 3-way systems and traditional coaxial speakers, with none of the drawbacks traditionally associated with either.

All of this make the IN-5 and IN-8 extremely accurate and easy to mix on. You’ll be able to work faster and with more confidence, and your mixes are going to translate to other systems with less work.

The single most important aspect of a studio monitor is its accuracy. A good studio monitor should present the material it’s playing faithfully, allowing you to make critical decisions that you know will translate to all the systems that your work will ultimately be played on.

Not only do the IN-Series monitors accomplish this, but their coincident architecture allow them to be more accurate than other speakers in a wider variety of challenging acoustic environments.

You can find a full set of third party measurements for both the IN-5 and the IN-8 2nd Wave below: 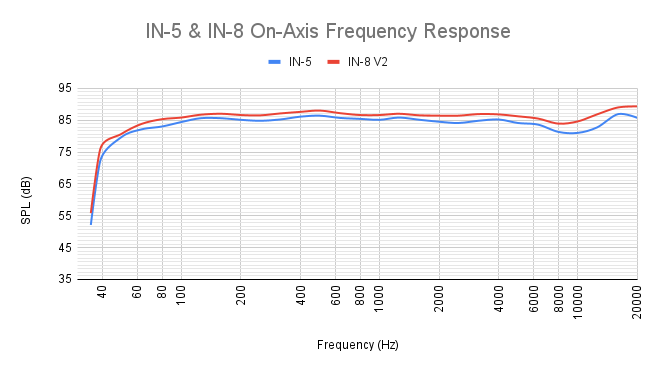 Because of the IN-Series’ coincident architecture, you may notice a dip between 8-10 kHz when measuring with a single stationary microphone. The dip is an on-axis diffraction artifact of the midrange baffle interface. It is evident in on-axis measurements, but not in total sound power. Perception of timbre should be neutral in most rooms. It is not recommended to apply room-correction EQs to the INs based on single point static measurements.

We know. We keep harping on about the “hyper-realistic” imaging of the IN-Series. What does that mean?

When you listen to a stereo set of speakers, you’re hearing information about where instruments and players were placed when the material was recorded. Even with purely digital material, producers can manipulate physical locations of elements in the mix, and you will hear these on a stereo recording.

Not only does this allow producers to create interesting spatial effects, but it means that you can work faster and with more confidence. An accurate soundstage lets you “see” each element of the mix in front of you, so you can hear exactly what happens when you make changes.

2-way systems with good waveguides, like Kali’s LP-6 and LP-8, do a good job at conveying this spatial information. However, because the tweeter and woofer on those speakers (and most studio monitors!) are separate, this information gets lost in the space immediately above and below the speaker. This means that at the listening position, you’re not hearing the full stereo picture.

The IN-Series solves this problem. The tweeter and midrange share an acoustic centre, and the woofer is crossed over at a low-mid frequency, so the distance between the woofer and midrange is well under a quarter wavelength at the crossover point. This means that each IN-Series monitor is acoustically a point source. As such, it has the same excellent directivity that the LP-6 and LP-8 have at their sides in a full 360 degrees around the speaker. You’re hearing all of the spatial information at the listening position, so the soundstage that you hear will have every detail that’s present in the mix.

The IN-Series monitors have very low distortion. This is the result of unburdening both the woofer and the tweeter, so that both are doing less work; the tweeter is only focused on high frequencies, and the woofer only has to worry about bass.

Taking up the space in between in the hero of the IN-Series: the 4-Inch, profile-optimised midrange driver. This driver has a lot of work to do. In addition to reproducing midrange frequencies, it also acts as the waveguide for the tweeter. This means that the shape needed to be precisely engineered to provide an ideal dispersion characteristic for the tweeter.

It also means that the midrange needs to stay still. In many other co-axial or concentric systems, high excursion from the larger driver causes intermodulation distortion, and degrades the accuracy of the system. The midrange on the IN-Series is limited to less than 1 millimetre peak-to-peak excursion, making it acoustically stationary while still providing midrange to keep up with the powerful woofer and tweeter. 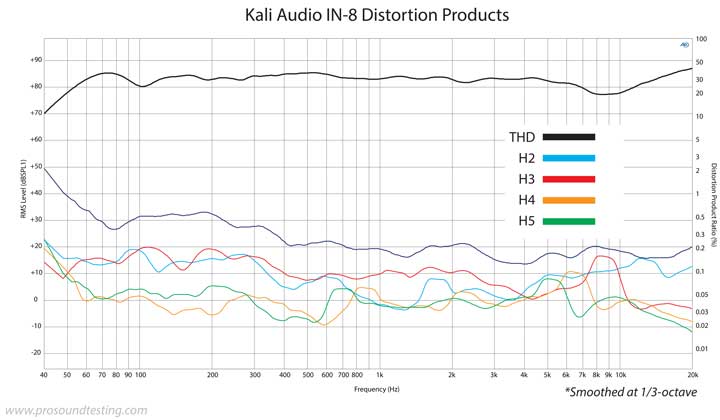 As measured by Pro Sound Testing in Greenville, IN.

The new 2nd Wave in IN-8 and IN-5 features the latest technology developed by Kali. A new amplifier platform realises a 12 dB reduction in self noise vs. the original IN-8, lower distortion, higher output, and better reliability. Learn More →